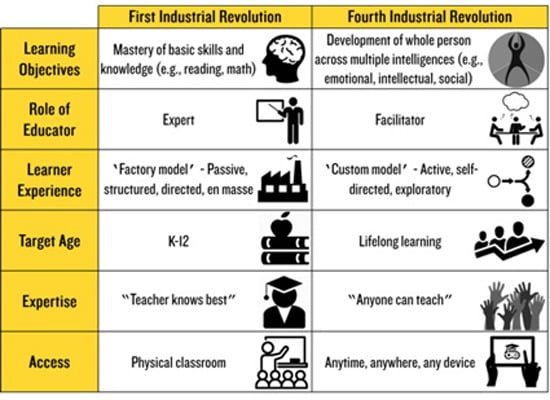 The education system as we know it is only about 200 years old. Before that, formal education was mostly reserved for the elite. But as industrialization changed the way we work, it created the need for universal schooling.

Factory owners required a docile, agreeable workers who would show up on time and do what their managers told them. Sitting in a classroom all day with a teacher was good training for that. Early industrialists were instrumental, then, in creating and promoting universal education. Now that we are moving into a new, post-industrial era, it is worth reflecting on how our education evolved to suit factory work, and if this model still makes sense.

“Factory schools,” as they are now called, originated in early 19th-century Prussia. For the first time, education was provided by the state and learning was regimented. Dozens of students at a time were placed in grades according to their age, and moved through successive grades as they mastered the curriculum. They took an industrialized approach to education: impersonal, efficient, and standardized.

“Much of this education, however, was not technical in nature but social and moral. Workers who had always spent their working days in a domestic setting, had to be taught to follow orders, to respect the space and property rights of others, be punctual, docile, and sober. The early industrial capitalists spent a great deal of effort and time in the social conditioning of their labor force, especially in Sunday schools which were designed to inculcate middle class values and attitudes, so as to make the workers more susceptible to the incentives that the factory needed.”

The industrial revolution created jobs that had ever existed before. For previous generations, Mokyr describes, artisans and farmers mostly worked out of their homes and set their own hours.

The transition to factory work was unpleasant, to put it mildly. The idea that men had to show up and take orders from a boss—someone they were not even related to—was demeaning and emasculating. Factory conditions were often terrible and completely changed how people organized their days. Time was no longer their own.

Economists Oded Galor and Omer Moav argue that Prussian factory-style schools caught on across the West as the spread of industrialization created a need for compliant, literate workers. Industrialists led the charge to adopt universal education in the US, UK, and elsewhere in Europe. Factory owners were among the biggest champions for the Elementary Education Act 1870, which made education universally available in England.

In a post-industrial world, education may require an equally bold rethink. It might mean more comprehensive adult education, or regular retraining, to keep skills sharp as old jobs disappear and new ones appear that require vastly different responsibilities. Or it may involve integrating technology to create more personalized learning experiences.

Modern captains of industry take more a hands-off approach to education. They complain about skill shortages, but don’t offer the same leadership and willingness to fight vested interests as their predecessors. Maybe it is time that they did.

The above is an article posted on the qz.com website in 2018. As for its account of the past, the article was quite accurate. What today is called “the right to education”, when mentioning the mass education system, has not always been a “right”· it came into being as a state strategy and was often violently imposed against the workers’ and farmers’ wishes and needs at the time. And as it rightly points out, the need for a new education system did not arise only due to the knowledge gap regarding those learned by the workers outside the factory and due to the skills that would be needed to stand in front of the assembly line. In any case, as it still happens even today, a lot of knowledge is acquired in the workplaces themselves and the rest of the knowledge needed does not in any circumstances justify 12 (for primary and secondary education) plus 4 (and for university education if added) years sitting in classrooms. There are also other reasons behind the such long school terms in the “slave galley” of education· reasons related to ideology and discipline, reasons related to training both the body and the mind for the norms of the social factory (the confinement to a chair, like at desk jobs, wears down the body more than the mind, putting it in a quite simplistic way if needed to be seen those two separated apart).

Where the mental confusion (of the article writer) or maybe the absolute cynicism begins is at the point when it comes to discuss about the present. How on earth come that any new system shouldn’t be violently imposed, even if such violence is not evident? Why shouldn’t the continuous pursuit of skills, which is already a reality, be considered soul-crushing and cruel and eventually even physically dangerous as well? We would simply remind you that depression is sweeping now and is an underlying cause of death in the western, post-industrial world.

But the article writer might be worrying in vain. There may once have been a need for walls and teachers-human guards to enforce discipline. Today the same is achieved with small screens and data collectors.