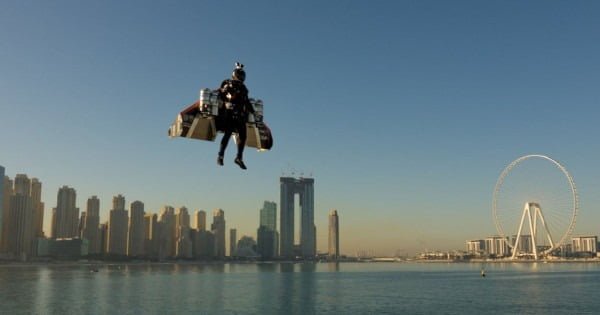 Soul flyers are a team of reckless air acrobats -whatever “acrobatics” may mean in this case, from skydiving to… Vince Reffet is a member of the team. He was “booked” for a spectacular demonstration of a solo [human] flight, which makes sense in terms of who would be willing to enter such a project. The toxic guy of the emirates does pay well and the show was a teaser for the upcoming “connecting minds, creating future” expo [2020], which is already set for the coming autumn (end of October) in Dubai. Who will be there, though, to do all the related research and construction -and why?

There is an american company (called jetcat usa) that specializes in micro-turbines and works with the u.s. army -for the obvious reasons. And it does so not only for the airborne marines, but also for the drones -even also for future uses by NASA.

The demo that took place some days ago in Dubai had its own characteristics. About a half a year ago, last August, we mentioned Franky Zapata, who crossed the Calais channel (for others known as the “english channel”) by flying on a personal device [called hoverboard] -which its development was funded by the french ministry of defence. Therefore, the show was a publicity stunt for the french technological capabilities…

Now, the turbocharged driver Reffet “reached” over 200 km/h for few seconds. Something which may attract the attention of the american airborne marines across the globe, in terms of “immediate intervention” here or there.

No jokes can be made about the modern “Icari” and “Daedali”1according to ancient greek mythology, Daedalus and Icarus were the first human beings that used man-made wings to escape from a palace.. They were fugitives; the modern ones, when this new technology is introduced, will be killers, what else?