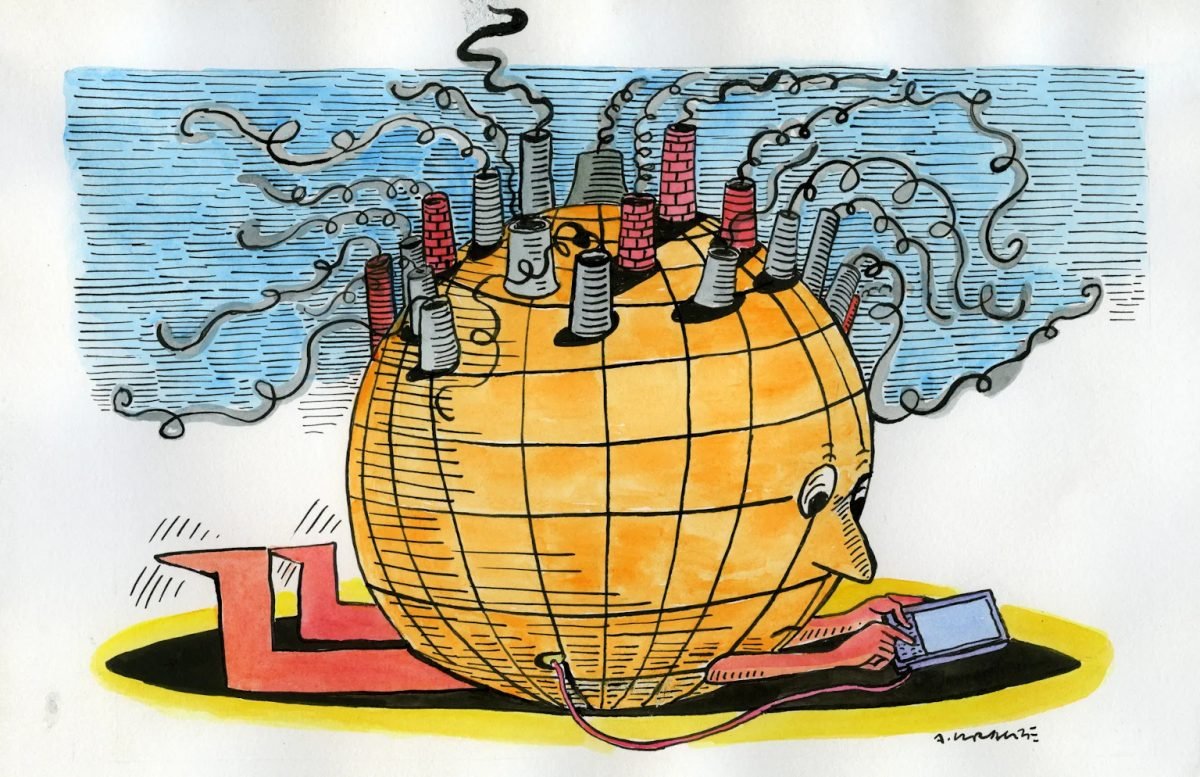 The clear atmosphere of the metropolis appeared from time to time, in the form of panoramic photos, in the good news of the quarantine days. One positive side effect of that period was the “health of the atmosphere”, various claimed. Of course, in a period when one tenth of the vehicles are in circulation, it is logical that there is a difference in the emission of pollutants but also in the general image of the city-from-above. There is nothing hidden or remarkable here. Now, if you need a pollutant-meter, a nice time with good lighting up in a hill and enough lung self-suggestion – like “really dude, we’re finally breathing” – in order to observ this difference, it is just insignificant details that prevent us from seeing the “essence”.

The usefulness of the “clear atmosphere” as a positive of the quarantine is self-evident. In addition to compensating for the quarantine woes, it also serves as a stimulation of the ecological instincts, like a friendly tap in the backs of the “stay-at-home” activists who saved the environment, along with their grandmothers and grandfathers. Cut and sewn like a photoshop of a moment of the reality, however, it (the clear atmosphere) also relies on the vanity of “individual activism”, like another mirror of self-satisfaction.

But the big picture, which does not fit on the surface of any mirror, is different. A fact that “escapes” – regardless of quarantine – is that what does not pollute “our yard” is located and pollutes others elsewhere. Ok, we didn’t say anything new, but it’s interesting how easily this simple fact can be bypassed when the perception of the world is spatially limited. The forms in which this narrowness appears range from the placement of the trash can on the opposite sidewalk to the transfer of factories to other locations outside the frame. And it is not sensitivity for other places that forces us to see the big picture (if it is something, it is certainly not sensitivity), but the overall perception of the destructive tendencies of capitalism.

From this overall perception, the second fact emerges, which is also related to the quarantine period and has to do with the total emission of pollutants. As you know, electronic devices do not have exhaust fumes to emit smoke that pollutes our neighborhoods, right? Correctly. But they do have the factories that produce all this, the power plants, the datacenters and all the central infrastructure of the internet and much more that is needed to be able to, let’s say, order the food with one click. Thus, while we have a “clear atmosphere” in the cities, due to the reduction of travel by vehicles, there is also an increase in total pollution from the increasing use of the internet. Various surveys that can be easily found on the internet (contributing a little more to the increase in pollution!) state that the transition to tele-life maintains at the same level, if not increased, the overall percentages of emissions.

Among other things, one can read the carbon dioxide emissions that correspond to a simple internet search, an email, a “download” of a photo of x-megabyte, etc1Do I emit CO2 when I surf the Internet?. For example, a study by a major energy company in england states that “if every british person sent one email less each day, 16,433 tons of coal a year would be saved”, and with the title “think before you thank”2Think before you Thank incites people to send fewer messages of “thank you”, “ok”, etc.

So, everyone can and should calculate their digital “energy footprint”, add it with the corresponding “analog” (electricity in the house, garbage and the use of recyclable materials, urban travels, etc.) , to multiply it by the number of inhabitants in its neighborhood (to be frighten with the harsh and dirty reality of the “big picture”) and in the end to subtract everything he/she can, in order to sleep peacefully. Thus, with the individual duty to monitor our health in order to protect public health systems, comes this duty for measurement of our energy footprint, in order to save the planet – incorporating a little more surveillance.