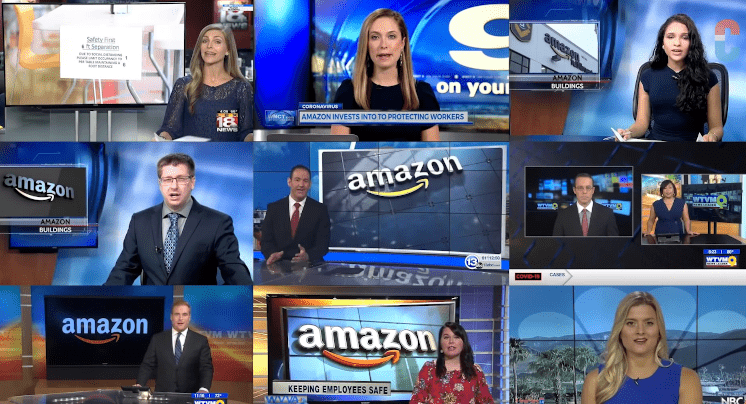 The control of the media and, consequently, the manipulation by the media is not a new trick. If we still need to prove that “the news” are used as reality shapers, then we are many steps behind anything competitive. However, during the “pandemic crisis” it seemed that this was not a given.

The video above shows how comfortably the truth-preachers can be orchestrated in the same tune. This is the case with amazon, which, after initially failing to control the state of its operation in this sharp increase in demand and on health measures in-mid-quarantine period, shared the bail out text (along with tip for a coffee apparently) on various tv stations (at least 11), which reproduced it as it is.

It is therefore not unreasonable to suspect (at least) the role of the media in building the truth about the pandemic. Which is necessary for the propaganda of the death logistics to have an effect. After all, as we saw in Event 201, the bosses who were discussing the management of the possible future pandemic were anxious about how the information and the media could be managed.

The “why” wonder that many have, listless by the capitalist counter-action on the large scale, accustomed to their in-house issues, is reasonable. But if examples like this in the video show something, it’s not the “why” of the parallel/similar government reactions to the pandemic – something that for many is proof that things are as they are. This is the work of a broader analysis of the tendencies and the dead-ends of western capitalism.

What they show is the reality of the use of media as tools of propaganda. There is no hidden complexity in this – certain people are trying to defend their specific interests. And the recognition (and) of this fact is useful for any further fruitful competitive analysis and critique (and) of the recent pandemic, from a working-class point of view – separated from those who take it blind-folded (friends of the quarantine) and from those who are searching for anthropomorph reptiles in the shadow-backgrounds (conspiracy theorists).