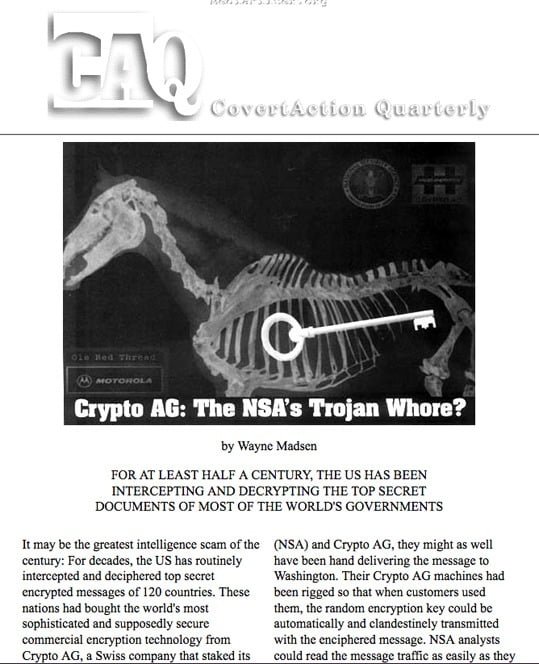 In the age of generalized surveillance of digital communications, there are always romantics (possibly representing themeselves as “experts”) who believe and propagate that the privacy of communications can be technically protected: through encryption.

However, we know that various apps (like whatsup) that are offered as encrypted, are already broken by the state services. As long as one does the job; then he will sell the know how to anyone who pays… Practically anyone who has the largest budget (just: money), that is, either the states or their rich financiers, can hire the “best” technicians to break any digital encoding, sooner or later.

But it’s better to do something else. It is even more mafia-like, that is, it suits the states to the extent that they still have the monopoly not of violence but of the law: they can blackmail the companies to leave a “window” open in their software. So that agents and supervisors can come in and out.

Most recently, cia itself leaked to washington post and the german state television channel zdf that together with the german secret services, was the owner of the swiss company crypto ag. Specializing in cryptographic communications, crypto sold such “protection” to at least 120 states in the second half of the 20th century, with a “100% assurance” guarantee. An ideal argument, so the us and german secret services can eavesdrop all these “secret” state telephone conversations.

Although the issue had been known since the mid-1995s (the crypto was apparently overtaken and replaced by others not known for their ownership due to the development of digital computer communications), the fact that cia leaked it now it’s not a delayed remorse!!! It is part of the campaign against chinese Huawei, which tends to reach spectacular heights. The current revelation conveys this simple meaning to customers and users of 5G communications:

Some government agencies will monitor you anyway, you can’t avoid it. You can only choose whether you prefer us (usa and its allies) or the chinese to surveille you.

It’s blackmail, but if you think about it, it has a cynical past. It’s like someone was saying (and he was indeed saying it…) during the “cold” world war III: “either way, you’re going to get some nuclear weapons on your head… Choose if you want to get ours or the soviets”.

Will you choose who will have you at hand? Or is it better to significantly reduce these “bad habits” of everyday digital striptease?

(The title is about an old youth encryption game: if you wrote with a pen that had lemon instead of ink, the paper looked white; a small flame behind it blackened the lemon, and so the letters were revealed…)