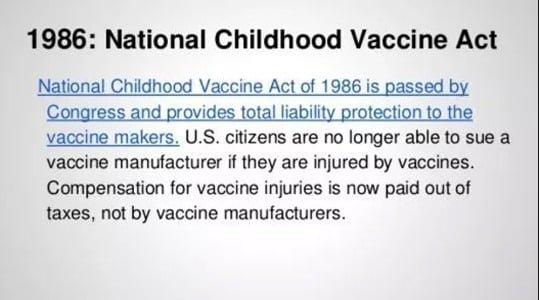 In 1986, a u.s. childhood vaccine injury act (NCVIA) set up a non-liability compensation program to stabilize a vaccine market that had been targeted for increasing litigation claims for vaccine-related offenses, and to identify compensation for plaintiffs for whom the damage caused by vaccines was extremely costly…

It was a law that recognized a) that it is possible for a vaccine to cause harm, b) that sufferers have a right to compensation for such harm, but at the same time c) that such compensation should be given by out-of-court settlements (with the mediation of ministry of health officials, in the role of “honest assessors”) on the basis of a scale of damage assessment, so as not to “suffer” (ie discredit…) us pharmaceutical companies with open in public lawsuits (out-of-court settlements are “silent”…)

In February 2011 the “supreme court of appeals” finally issued an important decision, renewing a judicial precedent that confirms the immunity/impunity of pharmaceutical companies for the side effects of their drugs, as long as a) they report them and b) “have made some effort to reduce them” (according to their statements). The case concerned the Bruesewitz family’s 1992 lawsuit against Lederle Laboratories over the permanent side effects and damage caused by the triple vaccine (diphtheria, tetanus, pertussis / DPT) to their daughter Hannah. (The Bruesewitz had turned down a $120,000 out-of-court claim and filed a lawsuit).

That decision (:rejected the appeal of the Bruesewitz…) of 2011 has various interesting points both historically and politically. For example, at the beginning it mentions these useful things:

For the last 66 years, vaccines have been subject to the same federal premarket approval process as prescription drugs, and compensation for vaccine-related injuries has been left largely to the States. Under that regime, the elimination of communicable diseases through vaccination became “one of the greatest achievements” of public health in the 20th century.

But in the 1970’s and 1980’s vaccines became, one might say, victims of their own success. They had been so effective in preventing infectious diseases that the public became much less alarmed at the threat of those diseases, and much more concerned with the risk of injury from the vaccines themselves.

Much of the concern centered around vaccines against diphtheria, tetanus, and pertussis (DTP), which were blamed for children’s disabilities and developmental delays. This led to a massive increase in vaccine-related tort litigation. Whereas between 1978 and 1981 only nine product-liability suits were filed against DTP manufacturers, by the mid-1980’s the suits numbered more than 200 each year. This destabilized the DTP vaccine market, causing two of the three domestic manufacturers to with-draw; and the remaining manufacturer, Lederle Laboratories, estimated that its potential tort liability exceeded its annual sales by a factor of 200. Vaccine shortages arose when Lederle had production problems in 1984.

This retrospection explains why this 1986 law provided for the protection of the pharmaceutical industry (primarily in terms of the side effects of their vaccines), giving to the victims some small amounts of out-of-court compensation. Interestingly, however – and for Lederde is indicative – up until then, u.s. courts, in which the pharmaceutical industry apparently has a say, have systematically justified plaintiffs by imposing large sums of money on companies. This means that the judges recognized the damages.

One of the phrases in the decision (“they were so effective now”) also explains why, if the threat of death from an illness is inflated, overemphasized to attract and dispel people’s fears, the “healing” companies can go undisturbed with their crimes. This is called Shock advertising.

However, the same historical retrospection of the 2011 trial, in its continuation, explains how, what is now called the “anti-vaccination movement”, appeared in the usa, and in fact on a significant scale, 35 years ago! In the 1980s: when the 1986 law put barriers to the forensic recognition of the responsibility of the pharmaceutical industry for the problems caused by vaccines, especially in children, combined with concerns about these problems, american families began to avoid them – vaccinations; especially the triple vaccine – DTP…

On page 5 of the 2011 decision there is another interesting reminder of the 1986 law (emphasis added):

They (companies) are immunized from liability for punitive damages absent failure to comply with regulatory requirements, “fraud”, “intentional and wrongful withholding of information”, or other “criminal or illegal activity”. And most relevant to the present case, the Act expressly eliminates liability for a vaccine’s unavoidable, adverse side effects:

“No vaccine manufacturer shall be liable in a civil action for damages arising from a vaccine-related injury or death associated with the administration of a vaccine after October 1, 1988, if the injury or death resulted from side effects that were unavoidable even though the vaccine was properly prepared and was accompanied by proper directions and warnings”.

The case in which the u.s. court in 2011 rejected any of Lederde’s responsibilities was serious. According to the same decision:

Hannah Bruesewitz was born on October 20, 1991. Her pediatrician administered doses of the DTP vaccine according to the Center for Disease Control’s recommended childhood immunization schedule. Within 24 hours of her April 1992 vaccination, Hannah started to experience seizures. She suffered over 100 seizures during the next month, and her doctors eventually diagnosed her with “residual seizure disorder” and “developmental delay”. Hannah, now a teenager (2011), is still diagnosed with both conditions.

This vaccine has been used since 1948. But that doesn’t mean the ingredients were exactly the same during the years. If the case of Hannah (who developed encephalopathy…) was indeed due to side effects (something that has already emerged from the history) that were still rare, the company (Leverde, which in the meantime, in 2011, was acquired and renamed – has now merged under a well-known commercial trademark: Pfizer…) would not be at risk of a storm of lawsuits, in case they paid any amount for the Bruesewitz case.

However, the protective legislation that was then in place and always in force was not even intended to save the american pharmaceutical industry from the possibility of bankruptcy due to their judicially confirmed responsibilities. It intended to absolve them of such responsibilities altogether, small or large! So that the simple indication of the side effects of a vaccine (or, more generally, any drug) in the relevant note in the box, becomes the royal way of their profits. This is because, even if one reads these side effects, what can one do if the drug has been prescribed for a more or less serious problem? (Nor, of course, is the doctor responsible for the side effects of a prescription drug.)

We want to hope that those who have read so far have not imagined a “conspiracy”! But they have realized that such is the general development of capitalism, and such is especially the capitalist development of the health industry. And it’s not “secret” at all!!!

“Remdesivir”, which is already being launched as a satisfactory drug for the serious side effects attributed to covid-19, made its own mark yesterday, not in the history of the pharmaceutical industry (there are several black marks, more on that later), but in the history of the aggravation of intra-capitalist competition! Trump’s administration bought/binded all the remdesivir quantities that the company will produce in the usa for the next 3 months! Hygiene nationalism – and so what? Because the drug is patented, only with the permission (and payment) of the company can it be produced by other pharmaceutical companies in other states. So the remdesivir became another star on the american flag.

What is the remdesivir, on which we can understand many basic parameters of the transformation of health into a category, in a field of capitalist political economy? It is primarily a product of the american biopharmaceutical Gilead Sciences. And it was a story of exemplary failure – until the bio-info-security complex came to power!

Remdesivir is launched as a broad-spectrum anti-virus. It was studied and made in 2009 as an antidote to hepatitis C… It failed… It was then tested against coronaviruses, SARS and MERS… It failed again… Then it was tested against Ebola virus and against Marburg virus… Again, it failed again! In other words, remdesivir was a failed five-fold build that didn’t make any money for Gilead, and it was left on the company’s menu like pure hassle!

Until it was tested against covid-19… Because covid-19 is practically a virus of limited risk (again in very specific cases) it became the ideal test field! It is supposed to be succefull against covid-19. Permit us to be suspicious: after 5 (in full: five) catastrophic failures, even against corona-viruses, we consider well-grounded the certainty that the “success” of remdesivir against the serious side effects of covid-19 is of the same kind as the “success” of tamiflu against H1N1 – that is, “success of public relations”, and nothing more…

But remdesivir is not pure water of god. It’s chemistry. And it has side effects. Even the not so “free-speech” wikipedia on such issues, in the relevant entry, mentions these side effects, which have been recorded in drug trials:

You can imagine what will happen when remdesivir causes “respiratory failure” in patients who already have respiratory failure! It will kill them, but they will be thrown into the “joint-container”1a term we use to describe the practice of blaming covid for every death, as victims of covid-19…

At the beginning of 2020, Gilead had 100kg (in powder) in its warehouses from the hitherto useless remdesivir. It was the amount that was left of the failure against Ebola. The covid-19 appeared in china and its ceo saw the opportunity! They dumped this “garbage” (sorry for the expression) on the regular packaging line, and ordered new raw materials from the company’s suppliers. On March 17, the czech republic accepted it as a treatment for patients in serious condition… This acceptance was so much of “public relations” that only 3 days later, on March 20, both Trump and the legendary “food and drugs administration” (FDA) declared remdesivir as an eligible treatment for severe cases of complications attributed to covid-19… It is a drug already patented – therefore the gains are guaranteed! What if it kills? Does not matter…

Impunity is also guaranteed for anything that happens due to the insignificant side effects on the body, especially in organisms burdened by “underlying diseases”.

“Small” detail: Gilead priced remdesivir at $ 3,120 per “individual treatment cycle”. It takes six doses/blisters, she says. A few days ago it was at $ 2,340 (a pack of six); but in the meantime, demand was better organized!!! It’s an outrageous price – but that’s the way capitalism is…

Detail two: Although remdesivir was not officially approved by the FDA, it has been circulating illegally since 2019, on the “black market”, on the internet and on social media. We don’t know if Gilead has a “black production” somewhere, but we would consider it unlikely that it would be a “pirate” production line… Getting rid of the powder left in its warehouses through “illegal contractors” somewhere in the world, seems more reasonable…

Third detail: The chinese regime made a trial use of remdesivir in February and March 2020, and found no improvement in the patients’ condition. However, they found serious (even fatal) side effects, as a result of which they stopped the tests.

Detail four: The well-known review of the new england journal of medicine published on May 22 the results of a remdesivir test performed a month ago, concluding that despite some positive results “given the high mortality despite the use of remdesivir, it is clear that the treatment with only one antiviral drug alone will not be effective”.

Naaahh…! No way! Such a thing is impossible, and anyone who dares to make such a suggestion (the evidence exists, of course!) is a “conspiracy theorist”!!! After all, as some incredible smart cats say, that the hygienic coups “are anti-capitalist”!!! It is, therefore, unthinkable for pharmaceutical companies to serve (or even be organized) – unless they are… anti-capitalist!

(As various self-employed “marxists” say: if the pharmaceutical industry is not anti-capitalist, then who is it? They will find something to explain/analyze this too!)

(photo: On the official site, Gilead slurs her words, being careful…)