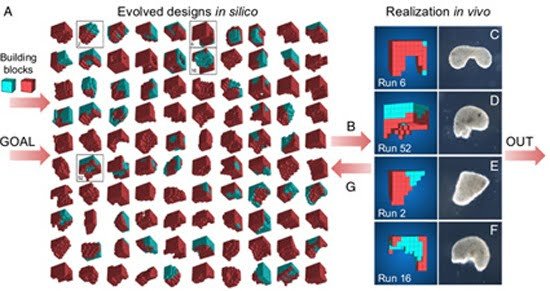 The image we usually have of robots mostly includes a lot of plastic, a lot of metal, power cables, noisy motors and flashing pilots. This was and remains to a large extent the dominant perception of robots, both in actuality and in (science) fiction.

In recent years, robots have also taken on another “intangible” form. Software packages such as personal assistants that are now built in many smartphones fall into this category – the movie Her was probably one of the first to artistically capture this new kind of robot. But these robots are, after all, electronic (and not at all intangible) devices too.

But science does not sit idly by. It is possible that the next type of robot will be entirely made out of biological materials (as in the first Blade Runner). u.s. researchers (funded, among others, also by DARPA) have recently managed to design on a computer and then construct tiny robots using cells a frog species as building blocks. The design involved too many months of simulations on a supercomputer to find the best shapes in which the cells could be combined.

Using tiny tongs, real frog cells were placed next to each other based on the shapes taken by the simulations, and cardiac muscle cells were also added to the entire structure to allow movement. And Frankenstein was born! The little xenobots (as they named them) started to move and even show something that looked like a collaborative behavior, when they were many in the same space together.

No one knows for sure if these robots should be considered living organisms – probably not, since they have no metabolism nor they reproduce, at least for now. Regardless of whether such “philosophical” questions are answered, the capitalist exploitation of xenobots will not be long in coming, if they appear to have such a potential. They are another example that the 4th industrial revolution is moving fast in directions that the blissful smartphone users do not even imagine.