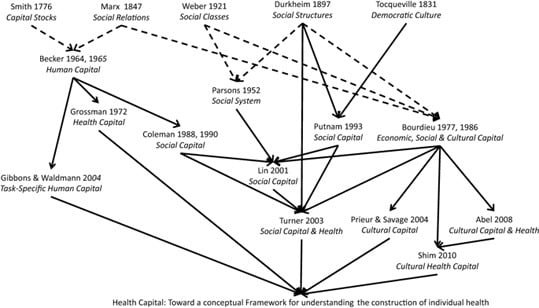 The aim of this study is to construct a model of the demand for the commodity “good health”. The central proposition of the model is that health can be viewed as a durable capital stock that produces an output of healthy time. It is assumed that individuals inherit an initial stock of health that depreciates with age and can be increased with investment. In this framework, the “shadow price” of health depends on many other variables besides the price of medical care. It is shown that the shadow price rises with age if the rate of depreciation on the stock of health rises over the life cycle and falls with education if more educated people are more educated people are more efficient producers of health. Of particular importance is the conclusion that, under certain conditions, an increase in the shadow price can simultaneously reduce the quantity of health demanded and increase the quantity of medical care demanded.

If this (somewhat incomprehensible at some points) summary seems a bit topical to you, in the sense that it treats health as (individual) capital (with all that entails…) you are making an inevitable mistake. This is an introduction to a 1972 article in the Journal of Political Economy of the University of Chicago, entitled On the concept of health capital and the demand for health, and authored by Michael Grossman. Grossman is one of the prominent American “health economists”; and the University of Chicago School of Economics was then the temple of (emerging) neoliberalism…

While it would be easy and gratuitous to cast all one’s curses on such guys, it is much more difficult for one and everyone to admit that the basic idea of (neo)liberalism, of health as (individual) capital, has prevailed and been massively internalized. So that it is considered commonplace.

This is not at all about the old saying “the greatest wealth is health”!!! Health – as – capital is NOT a passive state that simply exists when it is not affected by a disease. Health – as – capital is a state of constant activity, attentiveness, testing, care… enhancement. Health – as – capital is a dynamic relationship. With a “spook” (only slightly inferior to “immortality”); a dynamic relationship long ago commercialized, regardless of the existence and quality of public health systems. The fact that neoliberals have been arguing that health is an individual capital that, like any other capital, requires constant “investment care” in order not to be depreciated, has been a daily banality for decades in developed capitalist societies – even if the terminology which one would use to express this “investment care” for one’s health is different.

The fact that the healthy a) is such thanks to the assurance of laboratory / diagnostic medicine, and b) is “privileged” over the unhealthy, is also a cliché of the incorporation of basic capitalist ideas in the neoliberal period. In fact, this (social) integration is so intense and massive that the last historical phase in which medicine (and its definitions of “health” and “disease”) became a target of criticism was in the 1970s; maybe also a little at the beginning of the next decade – BEFORE the neoliberal ideological consolidation. Since then, the general notion of Capital of the Self, with the “sub”Capitals of Health, Education and Public Relations, has terminated all dispute, eliminated all criticism.

Thirty or forty years is a long time, even from a historical point of view. They are (roughly) two generations. Today, sharpening the blades of criticism of health-as-capital again, not in an “archaeological” way but with modern edges, looks like an alien. But still. The success of mass integration of health-as-capital is the solid ground on which the efforts of bioinformatics capital from the ’00s onwards were based to expropriate, on behalf of capitalism in general, life as a whole. (And not just human…) The hygienist terror campaign, the second phase of which is already underway, is the first successful and universal victory of this effort (with some imperfections of course), after some “general trials” (bird flu, swine flu, etc…).

To analyze (and understand) what health-as-capital means and what implications it has for the (capitalist) control of the social factory (ie: of all social relations) has some methodological and theoretical requirements that are not provided by the various versions of vulgarized Marxism and its followers. Thirty or forty years of disappearance of workers’ criticism + unlimited postmodern stupidity, make a suffocating swamp.

Anyone who intends to confront it (the historical moment demands it…) better know that it is (going to be) a lifetime project. Nothing less.