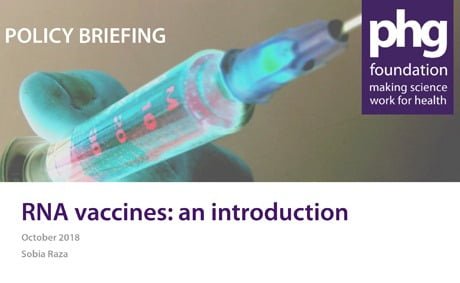 What are these mRNA vaccines, the “genetic reprogramming” vaccines, that will “save” us and, about which, we need to know nothing but how miraculous they are?

We presented them in cyborg magazine #18 last July.. We copy a few excerpts (inevitably), and we will see what we can do to make more accessible (remember, however, that it takes patience and perseverance for those unfamiliar with the real facts of the 21st century to roughly follow what is going on). The emphasis is ours:

…Isabelle Bekeredjian-Ding, head of the microbiology division of Germany’s Paul Ehrlich Institut,, which is part of the German Federal Institute for Vaccines and Biomedicine, unambiguously explains (article in the online magazine Horizon, the “magazine for research and innovation of the EU”, 1 April 2020):

… by getting the human body to produce the viral proteins itself, mRNA vaccines cut out some of the manufacturing process [ed.: of the proteins needed for classic type vaccines] and should be easier and quicker to produce than traditional vaccines. In this situation, the major benefit is that it’s easy to produce (and) it will also probably be relatively easy to do an upscaling of production, which of course, is very important if you think about deployment throughout Europe and the world…

To put it simply: mRNA technology forces the body to do some of the work that the pharmaceutical industry has been doing so far; and thus saves time and increases profits on behalf of the companies!..

…There is a supposedly positive knowledge about it and a negative one. mRNA technology, utilizing nanoparticles, is used for anti-cancer purposes. And it is considered successful in mobilizing the body’s immune T cells against tumors. But on the other hand, nanoparticles are used in cosmetics, and there they have been shown to be carcinogenic. The best known case is the talcum powder of the chemical / pharmaceutical industry Johnson & Johnson.

The nanoparticle “propulsion” of the protein “pattern” in human cells adds an extra level of uncertainty to how badly mRNA technology can end up. All the more so that some biotechnological evidence used by the pharmaceutical industry has been known for a long time, and while many attempts have been made to develop a vaccine against other coronaviruses or viruses with this method, all attempts have already failed in their tests in animals.

Isabelle Bekeredjian-Ding at least acknowledges that there is a great deal of ignorance about whether and how mRNA technology can work against covid-19. The process of immunization against it has nothing to do with the analogous one against cancer cells. It is another part of the human “acquired” immune system that needs to be activated, the B cells. And “there is little experience with this”, she says. To add:

…What is really the current challenge is to understand whether these vaccines will really be able to mount a sufficiently protective immune response in the human and to understand, for example, which quantities of mRNA will be needed to do this…

Other issues that are ignored are whether the “target proteins” selected are the right ones; how targeted the body’s response to the virus will be; whether there will be side effects such as an immune overreaction, as has happened in recent months in some cases (without vaccine) leading to pulmonary embolism and death; and / or whether there will be case, where with the virus present in the body, the mRNA vaccine will worsen the condition.

We would add something more. There is a growing category of modern diseases called “autoimmune diseases”: the immune system of the human body turns against this very organism, considering it hostile! It is (scientifically…) unknown why this happens, because among other things it is unknown how what in Western medicine is called the “immune system” works. Some “autoimmune diseases” are technically managed by various “make-ups as one goes along”. Nevertheless, ignorance is factual and strong.

So what does it mean to force an organism (part of it) to play the role of a “double agent”, that is, to produce itself the pathogen that will then cause the immunosuppressive activity of the same organism? What does it mean to artificially and biotechnologically transform some parts of a body into “enemy agents”? Why wouldn’t something like that lead to a generalization (on a population scale) of “autoimmune diseases”?

In any case: this is a genetic modification of the human organism! That is going to pass furtively, via the fog of fear. Westerners who promote mRNA technology in covid-19 vaccines know this. And they answer: … It’s not in DNA… Indeed, genetic intervention / modification doesn’t take place in DNA but in the ribosomes of cells.

So what does this mean? That it’s harmless?