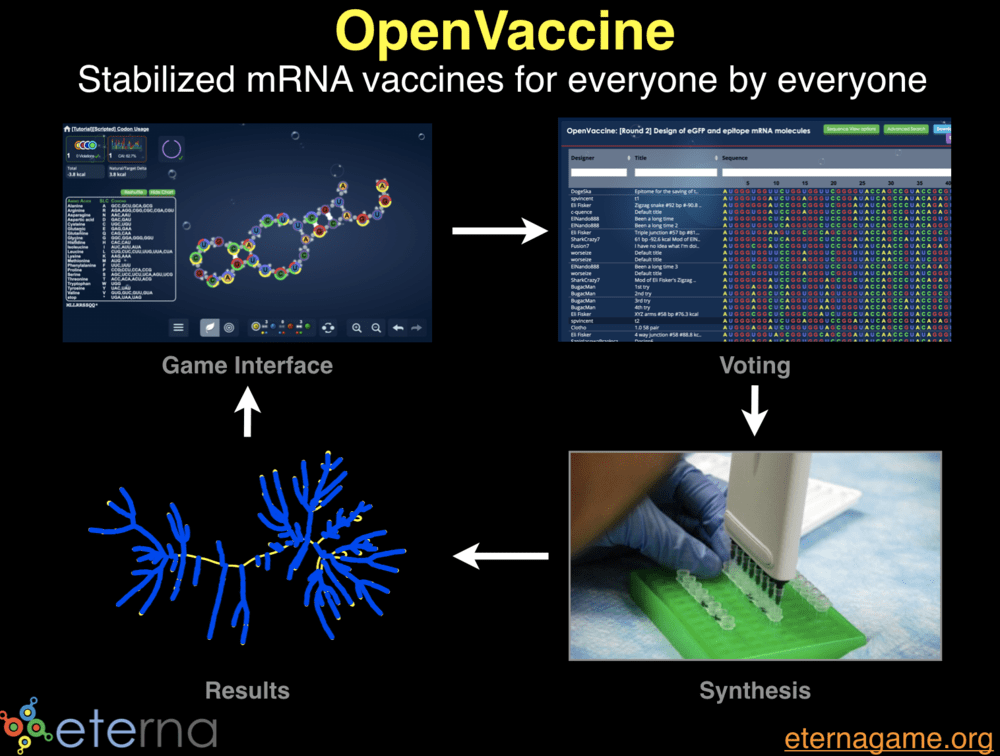 Could research into the longed-for vaccine include video games, such as those played on a mobile phone, to spend time? Apparently, yes; in fact, they are a crucial element of the ideology that surrounds this research – and science in general. That of “citizens science”. The above spot is a war presentation of the eterna video game. We have referred to this game again through the pages of cyborg magazine.1https://cyberpunk.link/356/

In this game the user can solve puzzles, which simulate rna sequences and possible problems / combinations that need to be solved / synthesized. A brief and concise description can be seen in the video below. At first glance, it seems as if the problems plaguing scientists are being opened up to a wider and unskilled audience, which in turn will specialize through the game and suggest solutions, make observations that will be useful in experts’ research. One can say it just like that, simply. But more specifically, what happens?

This game can be included in the broader category of “citizen science”, where “part or all of the research is done by amateur, non-professional scientists” – which is a chapter in itself. More specifically, this game is of the type “game with a purpose” or otherwise “human-based computation game”.

These games essentially use human skills to solve problems that computers can’t solve. As copied from the relevant entry in wikipedia:

Luis von Ahn first proposed the idea of “human algorithm games”, or games with a purpose (GWAPs), in order to harness human time and energy for addressing problems that computers cannot yet tackle on their own. He believes that human intellect is an important resource and contribution to the enhancement of computer processing and human computer interaction. He argues that games constitute a general mechanism for using brainpower to solve open computational problems. In this technique, human brains are compared to processors in a distributed system, each performing a small task of a massive computation. However, humans require an incentive to become part of a collective computation. Online games are used as a means to encourage participation in the process.

In practice these games are a way of voluntary machine training. First, the “processing cycles” of a problem are divided / distributed quantitatively to many “brains”; and second, there is a qualitative contribution to the process: intelligent algorithms can not yet calculate several things – or need too many “processing cycles”. Any human experience – from recognizing the forms in an image and naming them, to making combinations that don’t result from the rigorousness of the algorithmic steps – is offered to the machine to “augment” it. Now what it will yield in turn, is another matter.

Oh, and let’s not forget: who else, besides Stanford University, is a sponsor of eterna? But of course the charitable foundation of Bill and Melinda…