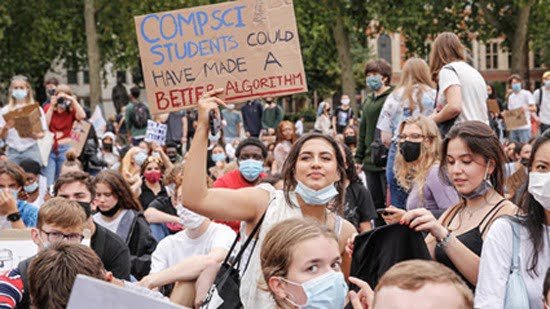 In mid-August, thousands of high school students rallied in front of the education ministry of Her Majesty’s government. It deserves be considered the second authentic demonstration against the “brave new world” of the 4th industrial revolution. What was the cause? The ministry decided to make a leap into the future and replaced the final exams with which students are graded for admission to colleges (which, due to hygienist restrictions, were not made), with this algorithm: Pkj = (1-rj) Ckj + rj (Ckj + qkj – Pkj)

It certainly seems and is incomprehensible. Understandable were the results of this “algorithmic assessment” that supposedly took into account the performance (in the tests) throughout the year: the machine lowered the final “grade” by up to 40% for most students. Paradoxically or not, the algorithm had a strong class inclination: it “stabbed” mainly the students of the most plebeian regions and schools of the united kingdom…

If this demonstration was the second, what was the first? In the usa, where 100,000 students of the same age demonstrated in July, for the same reason… While, In June, students from 12 american universities protested against the installation of cameras with face recognition software on campuses – a proper and classic anti-repression demonstration.

In all cases the ministries and others involved backed down. Pleasing moral of the story, especially when the “saving” applications of genetic engineering are in front of us: we must force them to step back!