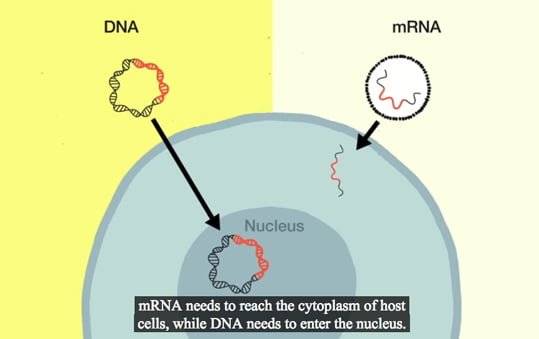 The JAMA Network (the creator of the video) is the official website (and monthly journal) of the American Medical Association, with a special focus on “bio-technological” sciences. The A.M.A. is introduced as the largest medical association in the u.s (including medical students); therefore it is rather difficult to characterize it as “conspiracist” or “denier” (although you never know…).

The video explains how mRNA (as well as DNA) quasi-vaccines that advance upon the millions of prisoners “work”. The first category, however, is a matter of weeks to come; the second will probably appear in a few months.

Even someone who barely remembers the basics of school biology will understand at least that it is NOT about vaccines, but about genetic interventions / mutations in human cells! The JAMA Network does not hide it (and that’s fine) but also does not make any kind of assessment of the risks posed by genetic engineering, even if it appears as a “lifesaver” against a “threat” that has been monstrously inflated by the bio-info-security complex and its lackeys.

To better understand what is shown in this video, we add some explanations, at specific points in time.

0.16: “operation Warp Speed” is a colossal u.s government funding program for big pharma and their partners to create “as soon as possible” (deadline is January 2021) vaccines and other potential drugs / treatments against the naughty-virus. The “operation”, officially announced on May 15, was initially funded with $ 10 billion; another 8 were added in October. The additional amounts given to this public-private partnership scheme by the infamous BARDA, the biotechnological branch of the militaristic DARPA (more explicitly in the cyborg magazine texts), which also took over the management of the operation, are unknown.

Significantly, shortly before the official announcement of operation Warp Speed, BARDA director Rick Bright resigned (or was forced to resign) in opposition to “attempts to fund potentially dangerous drugs promoted by those with political connections”. As director of BADRA, Bright must not have been a “saint” – but even him was frightened by what he saw being prepared! Therefore this statement should be remembered forever! As we should always remember that Moncef Mohamed Slaoui, who for 30 years (until 2017) was the head of the vaccine research department at GlaxoSmithKline, one of the well-known mafia pharmaceutical companies… succeeded him as head of BARDA (and, consequently, of the management of ‘operation Ward Speed’).

0.19: Robert R. Redfield is a virologist and the current head of the u.s CDC. He has been a researcher in the u.s army for many years. He was appointed by the dead ferret on March 26, 2018, but the “center for science in the public interest” (CSPI) revealed that he has a despicable past: Redfield was highly mercenary in promoting an alleged HIV vaccine he had made in military laboratories; and has advocated policies, that are cursed by most health professionals (in the u.s and beyond), such as the introduction of mandatory HIV testing, the recording of the “HIV positive” by state authorities without the consent of individuals, and the quarantine (for life?) for “positive” individuals working for the u.s military. He is now, obviously, the right man in the right place as head of the american CDC!…

1.00+: Are there still “skeptics” who do not want to admit that the capitalist technological “development” PRECEDED and THEN the incredible and terrible “lethality” of covid was constructed so that these civil technologies could be applied en masse?

3.25: From now on, watch how the activation of the immune system is “problematized”. The human immune system (like that of any other living being) exists for thousands of years before capitalism, and evolves “on its own”. But if capitalist technological development has reached the point where bosses are interested (and think they are able) in controlling / guiding, that is, replacing the immune system as a whole with their own technical, commercial and disciplinary constructions (with what is called “human-plus”?), then they definitely need to discredit the natural immune function (of the human body), to declare it “insufficient”, “ineffective”, even “non-existent”, to an audience that has lost all true experience and knowledge of bodies.

What should they do to achieve this? They should stealthily and demagogically invest in a random virus (or even more, in the long run) with such “lethality” that the (western, at least…) human species is scared to the bone, convinced that it can not withstand it, and that its salvation is only one: the military police, the coups, the big pharma, the big tech…

3.34 – 4.33: Here the “logic” of genetic engineering is introduced. That is this toxic idea: to transform (the) human cells, through their mutation, into pathogens, into variants of a virus!

4.34 – 4.47: The invasion, inside the cell, of the genetic instructions that in the form of synthetic RNA (or even DNA…) have been made by genetic engineers is done through “nanoparticles”. Molecules, that is, various materials (unrelated to the living body) that play the role of a “drill” in the outer membrane of the cell: they attack the cells… “Targeting” the ribosomes (this is not shown in the video) which are the “protein makers” that ensure the smooth functioning of each cell. It is unknown what effect these “nanoparticles” will have on healthy cells on their own, other than synthetic RNA or DNA, and what their reaction / defense will be…

This means, in plain words, that human cells that are attacked / invaded by “nanoparticles + synthetic simulation of viral protein RNA” (this is sold to us as a “vaccine”…) are mutated! Instead of doing their normal job, that is, producing the proteins of their natural function on behalf of the human body, they start producing proteins of the X or Y virus!!! The virus, however, is not made as such; but its “identity”, which human cells take on to look like a virus, is constructed… Thus, while they are still cells of the body, they turn into enemies of the body!!! And, presumably, this will trigger the body’s immune response… not to a virus (which does not exist) but to its own cells! Which it has to destroy (which is a complex process…), because as long as they are alive they will continue to produce X or Y virus proteins no matter what the immune system does: cellular virus “simulators” do not die in the same way as viruses! (That’s why these bastards who make and promote these quasi-vaccines do not take into account what they do in the long run but only if antibodies are produced… Yes: but antibodies, or T cells, act normally as they act against alien organisms; not against their own!…)

4.59 – 6.30: Here the tactics of genetic engineers are different. They mutate another virus (which, apparently, industries have in abundance to make millions of quasi-vaccines; unknown where they find it…) so as to “strike” not the mitochondria but the nucleus of human cells, i.e. their DNA. Thus (with the same end result as in mRNA attacks but with a different method) human cells that have been “occupied” by the “mutant virus A” / “simulator of virus B” begin to produce B virus proteins. That is, they become enemy cells.

The fact that the genetically modified virus / invader can develop into a “supervirus” does not interest the geneticists, and certainly not our industrial “saviors”! (And yet this has happened at least once, recently, with polio vaccines in african countries: the vaccine virus has evolved into a “supervirus”…) When needed, they will sell as a “salvation” some achievement of genetic engineering 3.0 or 4.0…

6.31 – 7.36: This version of genetic engineering (“for the sake of health”) shows how far geneticists go: they are willing and able to cause one disease in order (they say…) to face another!!! And the new one, with the genetically modified stomatitis virus, will have an unknown evolution; but who cares? Again some invention that can be sold as a medicine will be made…

8.55: Due to the “technical characteristics” of these genetic attacks / mutations, the evaluation of their side effects – even if we accept that the attacks / mutations serve a “good purpose”… – should last much longer than the 8 to 10 years needed for conventional vaccines, which do NOT make genetic mutations. The “side effects” of attacks / mutations can occur sooner or later, even after years: the guys who pretend to be “scientists” ignore almost everything about how the human immune system works (it also turned out and now, with covid: for months they searched for antibodies ignoring the work done by T cells…).

Therefore pirates / scientists can NOT predict when and how the immune system will react to the fact that the cells of the human body have behaved or are behaving like “viruses”! Since the human body has gone through thousands of years of evolution and adaptation, the “viral transformation” of some of its cells will be “stored in the memory” of the immune system, and it is completely unknown when, how and what its general response will be!

For instance, non-pirate physicians fear the possibility of deadly “immune shock” (officially called “cytokine storm”) by organisms that will “remember” that some of their cells began to behave like viruses, lethal / self-destructive shock breaking out even on the occasion of simple infections with harmless viruses… Or they fear a general outbreak of autoimmune diseases, those in which one part of the body considers another part of the same organism to be “hostile” and behaves accordingly; diseases which have already increased dramatically in recent years, for which ” experts “are completely ignorant!… (Isn’t that exactly what genetic engineering is promoting now?)

Let us recall: when the first mutant plants began to circulate a few decades ago, a great (anti-authoritarian and anti-capitalist movement’s) reaction broke out internationally against the release of genetically modified organisms into the natural environment. As if centuries have passed since then, the genetic mutation of our own cells is now going to pass as a… welcoming “salvation”!!!

This video was made by the mainstream “american medical association” for general use – though not for critical, workers’ use. We have a feeling that in our lands there are still many who react / do not care to learn the basics about their “saviors” and the genetic engineering merchandise that will poison their lives, maybe even forever. Lack of knowledge in english language… is not to blame for this reaction / carelessness. It’s a convenient egotistic, petty-bourgeois fantasy that starts with “Come on, nothing is going to happen to us” and it ends in “let’s take the jab to get our freedom”. Is this a deal? No freedom is gained like this from anyone! And no health!!