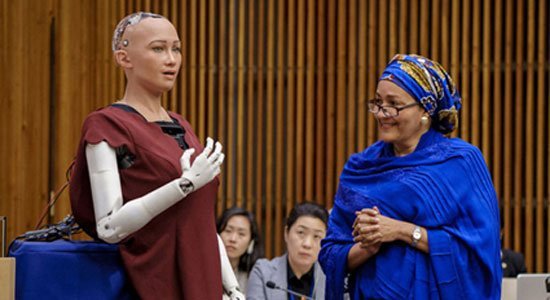 When it premiered, in 2016, it cut a big swath… “Her” company, Hanson Robotics, based in Hong Kong, specializes in high social intelligence machines. As self-presented on its website: Robots will soon be everywhere. How can we nurture them to be our friends and useful collaborators? Robots with good aesthetic design, rich personalities, and social cognitive intelligence can potentially connect deeply and meaningfully with humans.

So Sophia (this is the name of the model on the top left) may now have the opportunity to become a commercial success. The founder and ceo of the manufacturer has concluded: The world of COVID-19 is going to need more and more automation to keep people safe. The first batch of Sophia to be mass-produced this year should be (st)rolling out of factories by the summer of 2021.

You do not need to shudder, nor is it worth repelling such a development. Think. A well-constructed machine of “artificial intelligence” and “machine learning”, whether anthropomorphic or not, has many qualifications beyond its very “intelligence” (which will impress you). First, it is virus free under any animal threat conditions (it may be in danger of being hacked …). Second, it requires nothing more than electricity. And thirdly, it will take the appropriate (online) initiatives in your favor in case of emergency.

With a reconstructed idea of sociability, the post covid capitalist world is now much closer to Sophia than to wisdom…